Weight Loss Through Hypnosis- The Science

To be straight up from the start- weight loss through hypnosis is a vastly under researched field. 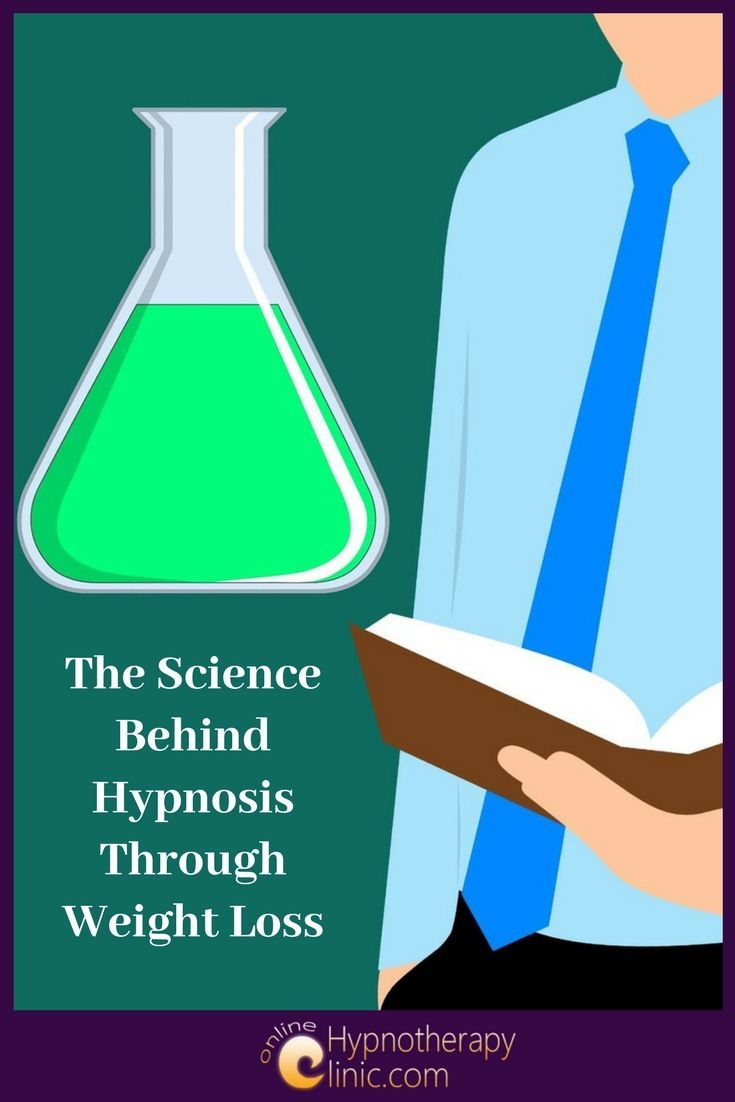 Find out about the science behind hypnosis through weight loss.

As you will see, there are a few researchers who- over the years have taken an interest and have had the funding to research different aspects of weight loss hypnosis, but by en large, the topic is much like a barren field.

Why is weight loss through Hypnosis under researched?

The phenomenon in full detail:

I have written about some of the background to this in my article on the science behind stop smoking hypnosis- in short, I believe the lack of research in this area is mainly due to economic reasons.

Personally, I believe that hypnosis is hugely under used. If it was more widely spread, a lot of issues that are treated with medical interventions could be resolved the natural way, and at a substantial cost saving.

In the weight loss industry, a myriad of drugs, some medical devices and surgical procedures all add up to a multi-billion dollar market with much internal competition. Each corner of the market wants to increase their profit margins, or at least hold on to their slice.

And these powerful industries have huge funds at their disposal not only for advertising, but also to hold at bay any product or service which could potentially replace medications, medical device products, or surgeries for weight loss.

Universities- the centers of research- are closely tied in with industry these days. Investment in research therefore will focus mostly on areas of benefit to large corporations.

So, for the purpose of this article, we will have to make do with the few studies there are.

Yet, you will see some impressive findings.

Research on the Efficacy of Weight Loss Through Hypnosis

I found seven studies that attest to the efficacy of weight loss hypnosis.

For this study, 60 female participants, all overweight, were divided in three groups:

All groups were examined for weight loss, first immediately after the end of treatment and again six months post treatment. Subjects in both hypnosis groups lost significantly more weight than subjects in the control group, leading to the conclusion that hypnotherapy is an effective treatment for weight loss.

45 obese female subjects were divided into three groups and were treated in different ways:

The results attested to the efficacy of hypnosis as a weight loss treatment over CBT used on its own.

Eight female subjects with clinical obesity issues received a hypnotherapy based weight loss program. All subjects lost significant amounts of weight. At the final follow up two years after the end of treatment, six of the eight subjects had maintained a reduced body weight compared with their weight prior to treatment.

172 overweight female subjects were treated for obesity in the following ways:

Both groups achieved significant weight loss, attesting to the efficacy of hypnosis as a treatment for weight loss.

Subjects were divided into three groups as follows:

All groups lost significant amounts of weight and reduced their Body Mass Index (BMI), with groups II and III losing more weight than group I, indicating that weight loss through hypnosis is an effective treatment.

Sixty obese female subjects were treated for weight loss with either:

Treatments were delivered as 12 sessions over 8.5 months and lasted 120 minutes each. They started with cognitive behavioral exercises followed by a hypnosis session, reflections and homework directions.

Both groups lost significant amounts of weight, with the acupressure group continuing to lose weight at 18 months post treatment. This study showed that weight loss through hypnosis is an effective treatment. 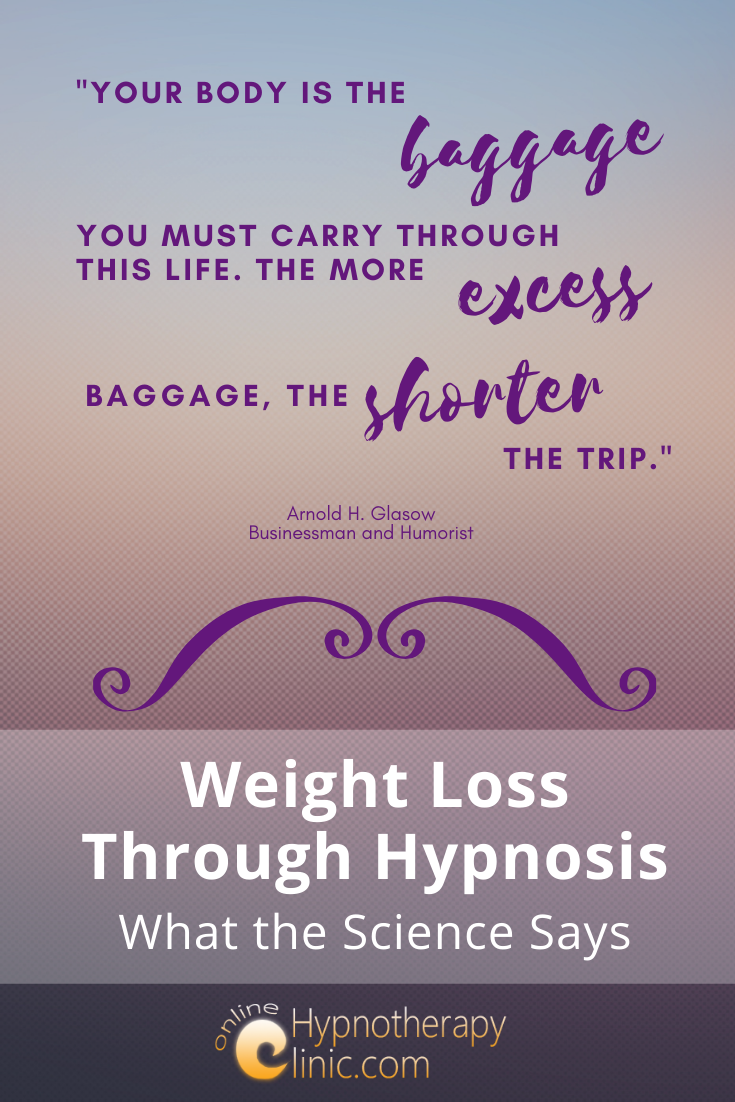 Use weight loss through hypnosis to reduce your 'excess baggage'.

Hypnosis has become popular with clinicians as an adjunct to cognitive behavioral treatment (CBT) for weight loss. I found five studies which examined the use of weight loss through hypnosis alongside CBT:

109 subjects completed CBT treatment for weight loss- either with or without the addition of hypnosis. At the end of the 9‐week program, both interventions resulted in significant weight reduction.
However, at the 8‐month and 2‐year follow‐ups, the subjects who had experienced weight loss through hypnosis showed significant additional weight loss, while those in the CBT group exhibited little further change.

This is a meta-analysis of 18 studies focusing on hypnosis as an adjunct to CBT. The findings were quite remarkable- weight loss hypnosis was found to increase the treatment benefits of CBT by some 70%.

This meta-analysis examined six different studies that examined the combination of CBT with hypnosis. Participants who had experienced weight loss through hypnosis alongside CBT lost more than double the weight compared to those who were only treated with CBT.

43 obese women were treated either with CBT and hypnotherapy or CBT on its own. Both groups achieved significant weight loss.

The group treated with hypnotherapy had much enhanced long term weight loss which continued until long after the treatment stopped.

Hutchinson-Phillips and Gow reviewed the literature around weight loss through hypnosis combined with CBT, such as treatment protocols and other articles on the topic. They concluded that CBT- out of all the available treatment options for obesity had the best empirical record in treating obesity and that weight loss hypnosis was a useful adjunct to CBT in treating obesity.

With Hypnosis, Subjects Continue to Lose Weight Long After the End of Treatment

Four of the studies above had results where weight loss hypnosis stood out for subjects continuing to lose weight long after the end of treatment:

The findings of three studies (Barbasz and Spiegel, 1989; Stradling, Roberts, Wilson and Lovelock, 1998; and Gelo, Zips, Ponocny-Seliger, Neumann, Balugani & Gold, 2014) indicate that the exact nature of the hypnotherapy treatment is important and will have an impact on the results of weight loss:

So, in Practice, What Does all This Mean for You?

First off, if you are interested in taking a program of weight loss hypnosis, you can rest assured that there is some scientific evidence that attests to its efficacy.

Secondly, the findings on different types of hypnosis treatments producing different results mean that if you are considering weight loss through hypnosis, it is really worth your while doing your research about the types of programs offered by different weight loss hypnotists. For example, you will want to know what these programs include, whether or not programs are individualized. I recommend that you research potential hypnotherapists and their offerings thoroughly before you book.

For more tips on this research have a look at my article 'Quit Smoking Hypnotist- 9 Things to Consider Before You Book'. Even though directed at a different type of hypnotherapy treatment, many of the questions you will want to ask will be the same, or similar.

So, What Does Science Say- Overall?

I introduced you to the studies I was able to find in my research.

I found 13 studies that were conducted over a period of 30 years- not exactly a significant body of research.

However, all 13 do support weight loss through hypnosis as an effective treatment.

Are you going to give it a go?

Hypnotherapy is often portrayed as unscientific. In this article I have  gathered the available scientific evidence that backs weight loss through hypnosis as a valid and valuable treatment...

Hypnotic Weight Loss- How to Get the Best from Your Treatment

This article advises you as to what you can do in order to get the best out of your treatment if you have decided to lose weight through hypnosis. Some of this is bound to surprise you...

Could You Lose Weight By Hypnosis?

Find out if weight loss hypnosis is suitable for you, what the underlying issues may be and what to expect from a program of hypnosis.

Gastric band hypnosis has become a popular alternative to actual surgical intervention. But does it live up to expectations? Find out what it does and what results you can expect.

Weight Loss Hypnotists- How to Find the Right one for You

It can be very daunting to look for a practitioner of a therapy you have never tried and heard mixed things about. Let me hold your hand with some sound advice...

Weight Loss by Hypnosis- 7 Benefits for You

Find out how you could benefit from weight loss by hypnosis.

Find sound advice and guidance if you want to quit smoking without gaining weight.

Self Hypnosis for Weight Loss- 7 Huge Benefits for You

Bolocofsky, Spinler & Coulthard-Morris, 1985. Effectiveness of Hypnosis as an Adjunct to Behavioral Weight Management Journal of Clinical Psychology.  January, 1985, Vol. 41, No. 1.

Kirsch, Montgomery, Sapirstein, 1995. Hypnosis as an adjunct to cognitive-behavioral psychotherapy: A meta-analysis. Journal of Consulting and Clinical Psychology, Vol 63/2, Apr 1995, 214-220