Hypnosis for Smoking Cessation- 5 Common Lies Spread by the Media

When I researched hypnosis for smoking cessation , I came across a lot of misinformation and a couple of overt lies spread through the media, online and offline.

These lies were so repetitive that I felt compelled to write this article to alert you to these common misconceptions about hypnosis that you are likely to come across. 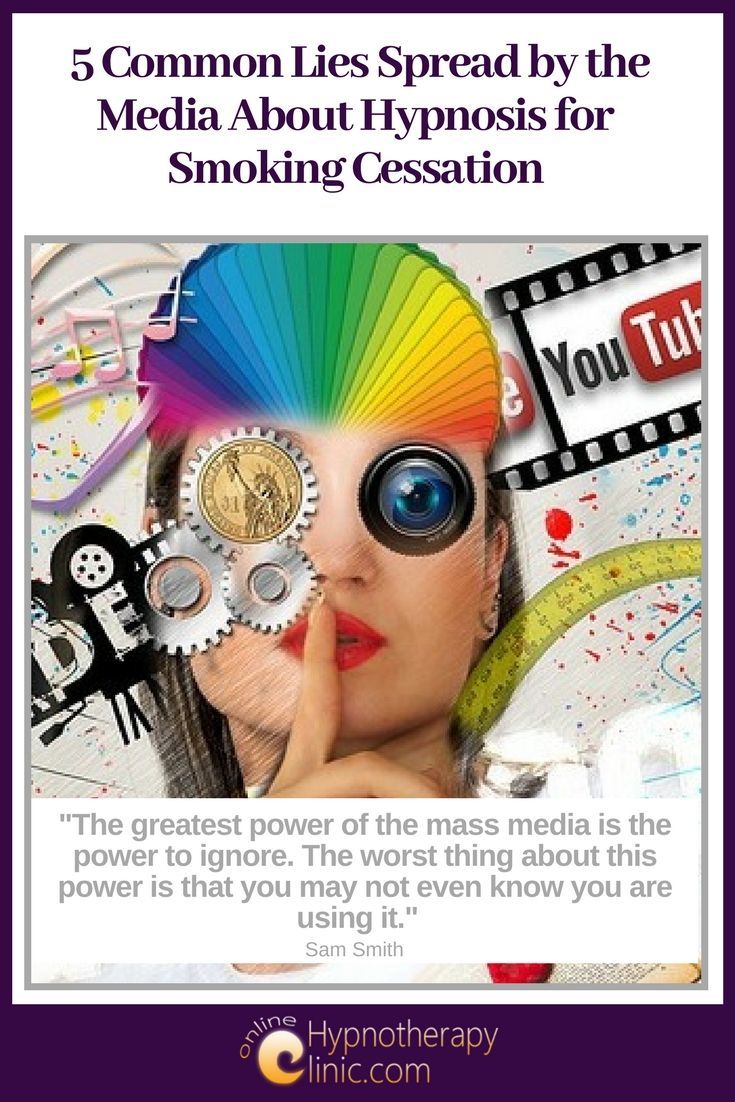 Hypnosis for smoking cessation- 5 common lies spread by the media

I will start by saying that I am not a fan of conspiracy theories.

But here is a curious thing I have been observing.

Yet, when you research hypnosis in the mainstream media, you will discover is that not much has been written about it.

The most popular use of clinical hypnosis that practically everyone is aware of these days is hypnosis for smoking cessation. And yet, there is little scientific research conducted about stop smoking hypnosis and there are only a handful of articles that I could find in the mainstream media about it.

You could outright call this phenomenon media silence about hypnosis for smoking cessation.

Of the few articles that have been written about hypnosis for smoking cessation, the majority are skeptical, distrustful and full of misinformation.

In combination, these two phenomena are quite profound.

I was stunned by my discovery. And I did end up asking myself the question who is likely to benefit if the truth about quit smoking hypnotism remains hidden...

2. “There is no scientific evidence that hypnosis for smoking cessation works”

See my article on the science behind stop smoking hypnosis which will give you in-depth insights on this topic.

But there are a few more points I want to make in this article.

This kind of statement crops up regularly in the media, especially in medical publications such as BootsWebMD here.

Typically, to make their point, these publications quote a well-known meta study (Green & Lynn, 2000). They will refer to it briefly, citing the researchers saying that “hypnosis cannot be considered a specific and efficacious treatment for smoking cessation”.

However, the sentence before that reads: “Whereas hypnotic procedures generally yield higher rates of abstinence relative to wait-list and no-treatment conditions, hypnotic interventions are generally comparable to a variety of non-hypnotic treatments” (Green & Lynn, 2000, p.195).

Another research study often quoted is the 2010 Cochrane Review, again a meta-study which faced much the same challenges outlined above (Barnes et al., 2010).

So, this was by no means an outright rejection of hypnosis as a method to quit smoking. Yet, the usually very brief sound bite in the media will make it sound as if it was.

The main difficulty for meta-studies is that there really is very little available research on hypnosis for smoking cessation which may be one of the most under researched fields. Find out why this is so and see some good scientific evidence on stop smoking hypnosis.

3.    “Hypnosis will only work for a small number of people”

WebMD here makes another claim you will often see made about stop smoking hypnosis: that it will, supposedly, only ever work for a small number or percentage of people.

Some authors make this claim with the sort of conviction that would lead one to believe that this was in fact, common knowledge. Sometimes they quote a figure of 25% of people who supposedly cannot be hypnotized.

Note that this is never backed up with any source or research evidence.

I have done a good bit of research and I have yet to see any scientific evidence to this effect.

Nor does such a claim resonate with my experience in clinical practice.

Far from it. In fact, scientific evidence points to the opposite- that the vast majority of people can be hypnotized quite easily.

4.    “I tried hypnosis for smoking cessation but it didn’t work”

There are a good few articles online written by journalists who tried hypnosis for smoking cessation. Often, the story lines in these articles take a similar route.

See an example for this type of story line here in Lifehacker.

You will do better with the truth, of course, because you are visiting the Online Hypnotherapy Clinic to educate yourself about what to realistically expect when you quit smoking through hypnosis.

Had these journalists been clear on realistic expectations, these articles might look quite different, too. 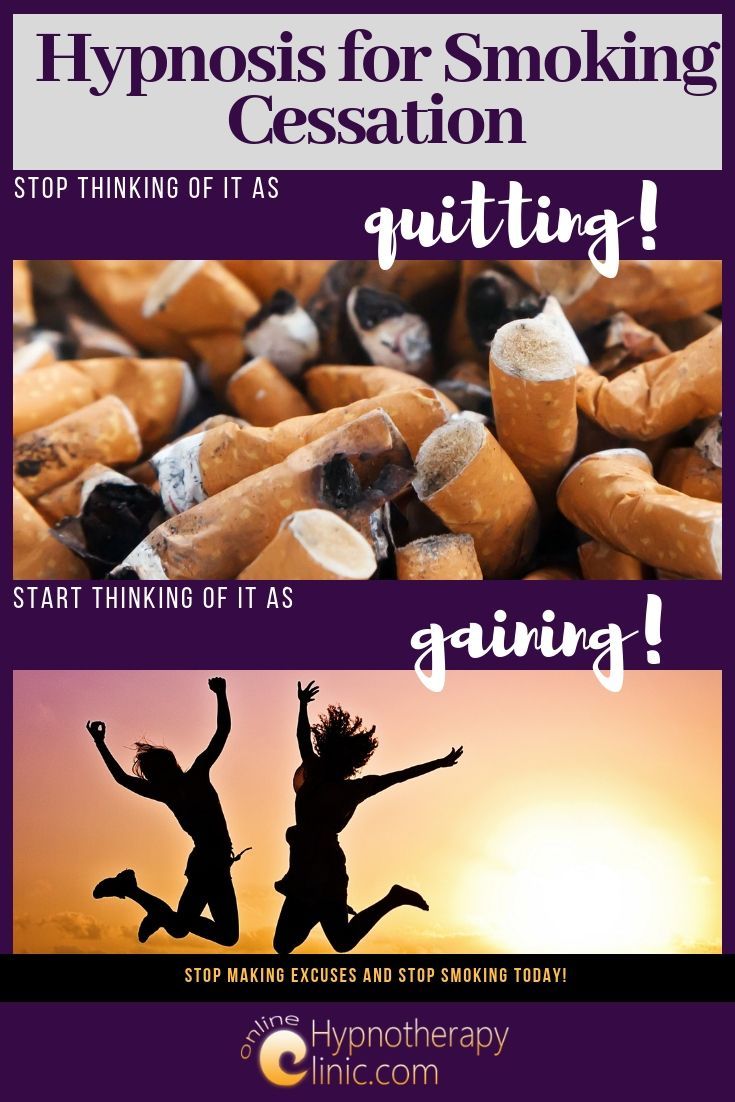 Whether you will use hypnosis for smoking cessation or another method- quit smoking today!

5.    "I used hypnotherapy to quit smoking and I DID stop smoking but the result is not due to the hypnosis"

In terms of how much untruth you can possibly spread about hypnosis for smoking cessation, this is my favorite twist on the theme of hypnosis not having worked: somebody who attended hypnosis for the purpose of quitting cigarettes actually achieving their goal and quitting for life- and then claiming the hypnosis had nothing to do with it!

Nah...you will say...that doesn’t make any sense at all.

And you would be right.

But does logic stop people from publishing untruths?

I found a prime example of this version of the story line in Alan Carr’s book (The Easy Way to Quit Smoking).

But on to the story.

Mr. Carr used to smoke 100 cigarettes a day. How did he stop smoking? Surprise, surprise.

Mr. Carr used hypnosis for smoking cessation. His wife sent him there, after everything else had failed. (This happens a lot.)

“The whole session appeared to be a waste of time. The hypnotherapist tried to make me lift my arms and do various other things.

Nothing appeared to be working properly. I didn’t lose consciousness. I didn’t go into a trance, or at least I didn’t think I did and yet after that session not only did I stop smoking, but I actually enjoyed the process even during the withdrawal period. (...)

Now, before you go rushing off to see a hypnotherapist, let me make something quite clear. Hypnotherapy is a means of communication. If the wrong message is communicated, you won’t stop smoking.

I am loath to criticize the man whom I consulted because I would be dead by now if I hadn’t seen him. But it was in spite of him not because of him.”

No reason given either for this bizarre twist in the argument.

But hypnosis for smoking cessation seems to be a fair enough target for people’s frustrations. Why?

Why are These Lies put Forward?

My thoughts on this topic are this.

For starters, there are economic interests at play.

Let’s face it, smoking cessation is a multi-billion Dollar market. The big players in this market in particular will do whatever it takes to maintain and increase their market share. And they have the money required to influence mass media on issues of their choice.

Secondly, on a different level, Western culture is all about the illusion of control.

But in truth, our conscious mind makes up only a very small part of our personality. Our subconscious mind, home to dreams, fantasies, emotions, desires, creativity, habits and addictions, is a much bigger part of us than we, culturally, like to believe.

Hypnosis is all about tapping into the virtually untapped resource of our subconscious minds. But this idea continues to be viewed with suspicion, culturally.

The more people are educated and understand what hypnosis for smoking cessation is all about, the faster these lies and hypnosis myths will die out.

More on Hypnosis for Smoking

Is hypnosis just a bunch of mumbo jumbo, or is there is any science behind it at all?

Is Hypnosis the Right Quit Method for You?

Quit Smoking Hypnotist- 9 Things you Should Consider Before You Book
Read this if you want to be in a position to make informed choices about which quit smoking hypnotist to chose. Some of these tips are likely to surprise you.

Hypnosis for Smoking Programs- 10 Things You Should Know
What exactly is a program of hypnosis for smoking? Most people don't know. Find out what to look out for in a program and what to expect from your hypnosis sessions.

Quit Smoking by Hypnosis- 11 Tips to get the Best Out of Your Treatment
Clear up some common misconceptions and misunderstandings some people have around stop smoking hypnosis so that you won’t make the same mistakes and can be empowered to get the very best out of your treatment.

Self Hypnosis to Stop Smoking  - 13 Benefits You can Expect

Why use self-hypnosis over attending a quit smoking hypnotist? Find out the benefits of self hypnosis.

Self Hypnosis for Smoking- Your Questions Answered

What exactly is self hypnosis for smoking and what is involved? Your questions answered.

Want to Quit Smoking, but Concerns About Weight Gain are Holding You Back?

Quit Smoking Without Gaining Weight- Yes You Can

This article explains the connection between smoking cessation and weight gain, and guides you how to overcome the challenge of with ease.

I hope my brief article on hypnosis for smoking cessation has helped you to understand a bit better how to interpret the kinds of things you will see in the media about hypnotherapy.

I have written many more articles on stop smoking hypnosis that I hope will help you deepen your understanding of what to expect and how to get the best from the treatment. These articles are linked to above. Enjoy the read!

In the comments underneath, let our community know what you have learned.

Green, J.P., Lynn, S.J., 2000. Hypnosis and suggestion based approaches to smoking cessation: an examination of the evidence. Journal of Clinical and Experimental Hypnosis, Vol. 48/2