Discover the Power of Hypnosis

10 Amazing Facts About Hypnosis You Most Probably Didn't Know

Discover the power of hypnosis in this brief article I have put together for you. Enjoy taking in these ten amazing facts about hypnosis that I am pretty sure you may not have heard before. 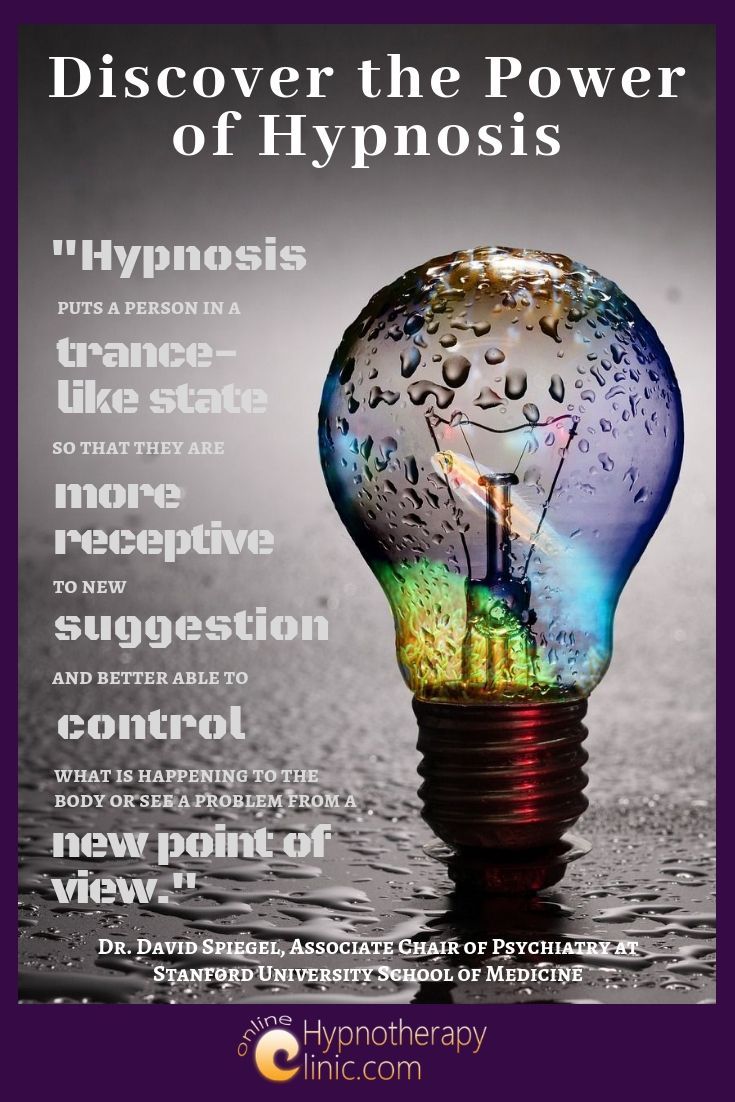 The Power of Hypnosis outlined by Dr. David Spiegel.

1. Did you Know That Many Famous Historic Personalities Used Hypnosis?

The topic of hypnosis has fascinated people of all classes from its inception in the 18th century by Franz Anton Mesmer (1734- 1815).

Although mesmerism/ magnetism continued to be largely rejected by the medical orthodoxy throughout the 18th and 19th centuries, it was highly popular with people of all classes, starting in Austria and France where Mesmer was active, and later spreading to the US.

Where the upper classes were able to afford consultations with Mesmer and other mesmerists (of which there were many), the lower classes attended traveling stage hypnosis shows for entertainment, or received diagnoses of their health problems through mesmerized clairvoyants.

Because of its popularity, there were many historic personalities who came in contact with mesmerism. The examples I gave on the info graphic here are only a small selection.

One example not included there is Wolfgang Amadeus Mozart (1756-1791) whose father Leopold was friendly with Mesmer and used to stay at his house when Wolfgang was a small child starting to perform his music in Vienna. Wolfgang is said to have composed some of his works in a trance state. While it seems plausible that Mesmer may have practiced 'animal magnetism' on Wolfgang, I have not found any clear evidence of this.

The examples included on the info graphic are of more recent times and historic evidence clearly exists that Winston Churchill, Henry Ford, Nicola Tesla, Albert Einstein, Thomas Edison, Aldous Huxley and Sergej Rachmaninoff all used self help hypnosis for personal growth and to further their careers.

2. Did you Know That Hypnosis (Mesmerism), from the start, had Cures for ill Health when Conventional Medicine did not?

In the 18th and for the first half of the 19th century, conventional medicine had nothing much to offer people by the way of cures. Medical doctors used forms of treatment that would be classified as questionable these days. They included bloodletting, the use of leeches, and severe purging. Many patients died from these treatments and success rates were very low.

As a result, many people sought the power of hypnosis for cures with complaints that medical doctors were unable to help with. There are many hundreds of documented historic case studies of mesmerism succeeding in cases where medicine failed.

Even before mesmerists fully understood what it was they were doing, the power of hypnosis tapped into the area of psychosomatic illness- where the subconscious mind exercises power over the body and causes physical complaints. Mesmerists/ magnetists were able to cure such complaints through various methods.

You can read more about the history of hypnosis here.

3. Did you Know That Freud did not Discover the Unconscious- but Hypnosis did?

Many people believe that Freud discovered the unconscious. But these people are wrong.

Throughout human history, people were always aware of unconscious activities through dreams, visions and similar. In medieval times these were often attributed to demonic possession, later to organic causes.

With the onset of hypnosis (mesmerism/ magnetism) in the 18th century, a new framework developed that described different states of consciousness, such as the conscious and subconscious minds. Hypnotism was an excellent tool for exploring the mind. Based on hypnosis, philosophers now developed the idea of ‘alternate streams’ of consciousness.

Freud started his work over a century after the inception of hypnosis. He came across it by accident when attending a stage show in Vienna where he was studying medicine in the 1870ies. By the time he graduated, hypnotherapy had become a popular method. He studied it and practiced hypnotherapy for some time but found the methods did not suit him. Ultimately he gave up.

His experiences with hypnotherapy, however, left a deep imprint on his work:

Yet, none of these achievements would have been possible without the work of hundreds of hypnotists throughout the 18th and 19th centuries. Here you can read more about historic personalities involved with the history of hypnosis.

4. Did you Know That Hypnosis can be Used as a Complete Anesthetic During Surgeries?

The power of hypnosis to alleviate pain has been well documented from the middle of the 19th century:

5. Did you Know That Celebrities and Executives use Hypnosis?

Discover the power of hypnosis- celebrities who have used hypnosis

In my info graphic I have illustrated examples of celebrities availing of the power of hypnosis for different purposes from smoking cessation to weight loss, to childbirth hypnosis, to career and self improvement.

These cases have all been documented in the mass media, and you will likely have been aware of at least some of them. But did you know that executives, such as CEO’s of large companies, also appreciate the power of hypnosis?

Executives use hypnosis to:

6. Did you Know That Recent Brain Imaging Research has Confirmed the Existence of the Hypnotic State?

For the longest time there has been a scientific debate as to whether hypnosis is a distinct state or not. ‘No state’ proponents such as Theodore Barber (1927-2005) argued that hypnosis achieved results simply through suggestion and that the altered state was not real.

And indeed, it has always been difficult to prove that such a state exists. But recent research from Stanford that used brain imaging techniques has opened the door to describing hypnotic trance.

The brain scans showed specific changes that take place in the brain in this state.

The results showed that under hypnosis, three distinct things happen in the brain:


Anyone who has experienced hypnotic trance before will be familiar with these three features from their own experience, but now researchers have been able to show them.

In combination, these three characteristic features combine to produce the power of hypnosis- used by hypnotherapists to effect changes in your mind that would otherwise be much more difficult to achieve.

See  more about the topic of how hypnosis changes your brain state in my article "What is Hypnosis?"

7. Did you Know the World’s Most Famous Therapist was a Hypnotist?

Milton Erickson (1901-1980) whose name you are likely to have come across somewhere before, is considered one of the most famous, if not the most famous therapist.

Much of his work was centered around hypnotherapy. Erickson developed his own method of hypnosis, called conversational hypnosis. This method is very flexible and designed to overcome anyone’s resistance to going into a hypnotic trance.

Erickson contended that he was able to hypnotize anyone and argued that if a patient was deemed not hypnotizable, it was the hypnotist’s fault. It meant the hypnotist did not use the right methods.

8. Did you Know That Everyone is Hypnotizable?

9. Did you Know all the Uses of Hypnosis Today?

You can use hypnotherapy for change in many areas of your life, and the list is ever growing:

10. Did you Know You can Achieve any Goal you Want Through Hypnosis?

Six Wonderful Benefits of Hypnosis for Creating the Life you Love

Find out the benefits of hypnosis over coaching and traditional talk psychotherapy in helping you change your life for the better and achieving your goals.

You may have heard anecdotal reports about hypnosis being nothing more than unscientific ‘mumbo-jumbo’ which might have planted this question in your mind. So, does hypnotherapy work? Find out my answer to this charged question, and it probably isn't what you would expect.

Find out the three worst mistakes any hypnotist can make so that you can avoid them and find the right hypnotist for you.

Evolution has given humans a powerful tool that enables us to be the most dominant species on the planet- yet this tool contains a critical flaw that is limiting many people and preventing them from living their dream. This may be limiting you, too...

The Secret Language of Hypnotherapy

Learn the secret language of hypnotherapy geared towards the requirements of your subconscious mind so that you can reach your goals more easily.

How Hypnosis Can Help You

Find out the most common issues that hypnosis can help you with and see what you could do with hypnosis to change your life.

How Does Hypnotherapy Work?

This article is a great starting point to understanding what to expect from hypnotherapy treatment, including what you can do to get the most from your treatment.

Hypnosis has been shrouded in mystery. There are many myths or, simply, false beliefs attached to hypnosis. You, too, have likely picked up a few of them as they are ‘around’ in public consciousness. Let me bust those myths for you so you can be free to enjoy and appreciate hypnosis for what it is.

Hypnosis or Self Hypnosis Trance

Hypnotic trance is referred to with much mystery. Is it really that spooky? Allow me to talk you through what the experience is like.

This article covers everything you want to know about suggestion hypnosis, including what it is, what it can do for you, how it works, what techniques are used and how you can get the very best out of it. Suggestion hypnosis can help you to reach your goals and change your life.

Regression Hypnosis can help you to clear blocks relating to the past which are causing you trouble now. Find out how it works, how it compares to coaching and psychotherapy and see if it is suitable for you.

This article fills you in on how you can get the very best from regression hypnosis and is a must read if you are thinking of embarking on hypnotherapy treatment for a complex personal issue.

Some hypnotists offer specific sessions to uncover past life memories. Is this a good idea? Find out what my thinking is on how to get the best results from past life hypnosis.

Does online hypnotherapy work or is it inferior to face to face work as some people say? Find out what's involved and form your own opinion about advantages and disadvantages working online with us.

What is Havening and how Can it Help you Change Your Life?

Find out about a novel psychosensory treatment we combine with hypnosis which can help you clear trauma, fears, phobias, anxiety, low self esteem and more while also supporting you in building resilience and positive emotions.

Find out about a fast moving hypnosis method which is the new kid on the block. It's dynamic, gentle and powerful.

I hope you have enjoyed my article on the power of hypnosis. Seeing that your curiosity may have been sparked, there are other articles in this series that may interest you...