You previously met Jason who attended me for hypnosis for depression. 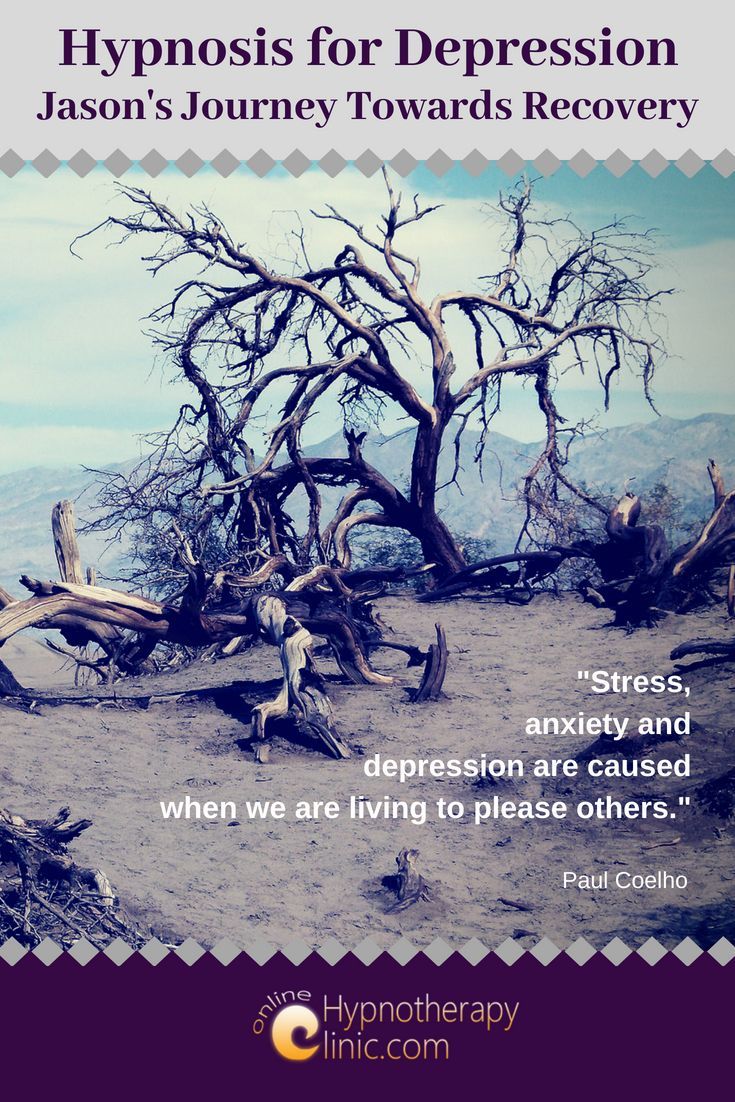 In this article find out how Jason finds himself with the help of hypnosis for depression.

In this article, I will talk about the hypnosis work I did with him, and the traumatic memories that Jason uncovered which shaped his depression. To be clear, Jason's example is quite typical of the types of issues encountered that underlie depression.

Just to recap, before Jason decided to take up hypnotherapy for depression, his life was pretty sad.

A man in his mid thirties, he was lonely and isolated and had been for many years. He had tried medication for depression but had discontinued it because the side effects were too much.

Stuck in a rut of work and meaningless boozing sessions at the weekends, Jason was struggling with low self esteem. He considered himself a failure and judged himself very harshly.

In our first session together I had asked him what he thought might be at the root of this depression. He wasn't able to name any obvious issues but had mentioned that he never liked school and did not perform well there, for which he also judged himself a lot.

We agreed on a course of regression hypnosis for depression, which he would support by using a maintenance suggestion hypnosis recording at home once a day. I also suggested some coaching to teach him some other useful tools that he could use to cope and process emotions.

In the first regression session, Jason found it hard to relax and let go. This is not uncommon when someone is new to hypnosis and has never practiced relaxation before. Culturally we are not used to relaxing, but rather, are taught we must keep going and keep busy at all times. I went very slowly with the induction, teaching him how to relax every body part individually, and giving his mind lots of extra time to relax also.

When Jason looked comfortable and deep enough in hypnosis, the time came for regression work.

On the first recall, the memory that surfaced for him was an argument age eight with a sibling two years older than him. The brother had called him a looser and had his friends laughing at Jason alongside. Naturally, eight year old Jason felt devastated and deeply betrayed by his older brother whom he had looked up to. Jason realized at this point in the hypnosis session that he had never actually forgiven his brother for this and still harbored anger towards him.

Anger, as I have explained in great detail in my article on depression self help- is a crucial piece of work when healing depression. Very often, what you will find is that underneath the depression there is much suppressed anger about injustices and perhaps abuses that happened in the distant past- anger that could never be felt or expressed safely.

I spent a good long time with Jason allowing him to feel his anger- which he later told me he never really had. Once the anger abated, Jason started having much softer feelings towards his brother, realizing that he, too, was only a child at the time. 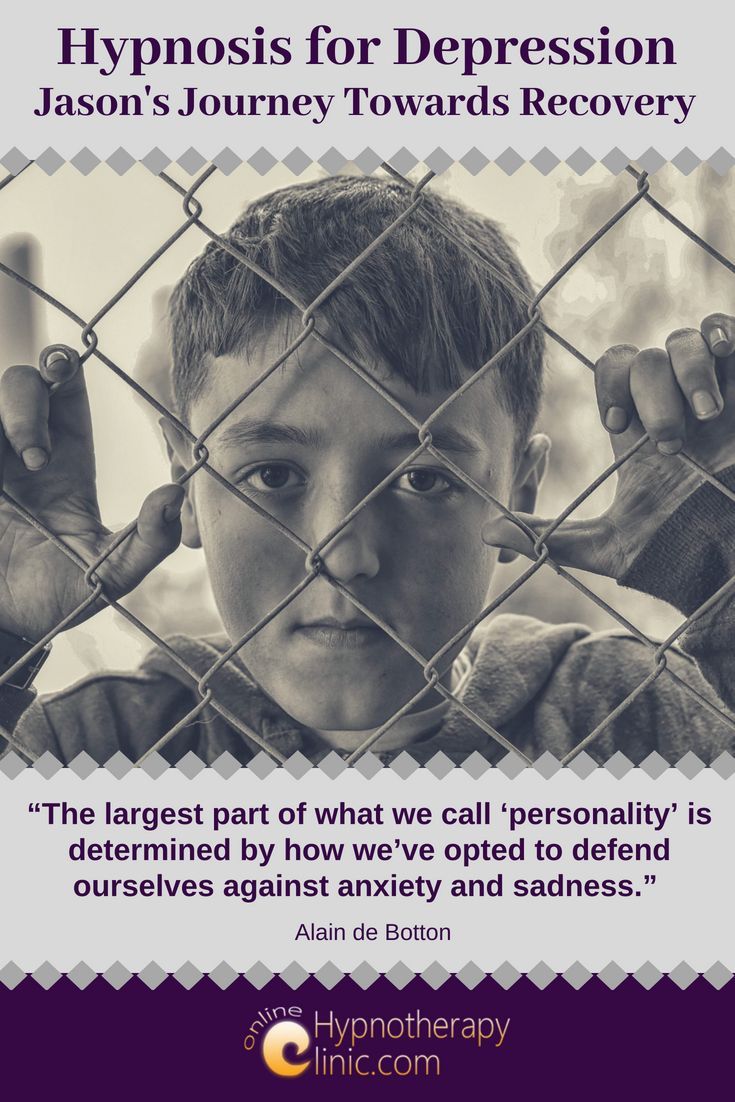 Once hypnosis for depression allowed Jason to feel the anger he had held on to for so many years, a big shift occurred in his mood.

In the second hypnosis session, Jason went into hypnosis more easily which meant there was more time for regression work. This time, the crucial pieces of memory that emerged, were- as I had suspected- about school.

In the first memory that came, Jason was in Junior Infants and only four years old. The class teacher had taken a dislike to him and used to regularly have him stand in the corner, sometimes for entire lessons- all for minor infractions such as not opening his book at the right page on time. The teacher called him names, too- in front of the entire class. There were another couple of kids in a similar position- but he was the worst affected. The other children in the class used to laugh at him, too, as a result.

I asked Jason how the four year old jason had felt about this. He had felt very sad and hurt, he answered.
That small child who had to go back into this abusive environment every weekday, could not safely feel angry about the situation. Instead, he internalized the abuse, and started believing that what the teacher said must indeed be true- he was indeed a bad child who did not deserve any better.

At one point, Jason attempted to tell his mother what was going on, but the mother was too busy to fully take in what he was saying. He was simply not heard and never talked about it again after that.

In the second memory that came, Jason was seven years old. His former class teacher had now advanced to become principal of the school. On this particular occasion she called him a looser in front of the entire school assembly. Now Jason could see where his brother who attended the same local school had gotten that idea from.

Again, it took a while for Jason during this session to get at the enger underneath all that hurt and sense of betrayal he was feeling- but of course there was anger and rightly so. How dare this teacher treat a small child in this way?! Probably a good quarter of that session was spent on making room for Jason to feel his anger in a safe and contained way.

In the third session, when the anger finally abated, the fog around Jason lifted. Now, he could suddenly see how these incidents from way back in childhood had set the path for his entire school career.

In the years to come, Jason started acting up on in school purpose. He never listened in class any more. He started not doing his homework. He hated school. He would mess up tests even if he did know the answer. Underneath all that however, Jason felt very bad about himself. He had internalized the negative messaging, the humiliation and his self esteem was badly affected. And that was how Jason became the 'low performer' that- as an adult- he believed he was.

No wonder that Jason had walked away from his school years with a negative self image. No wonder he became depressed as a young adult, and no wonder life became a struggle for him.

In this third and final session there were some tears for the losses Jason had experienced as a result of these incidents. 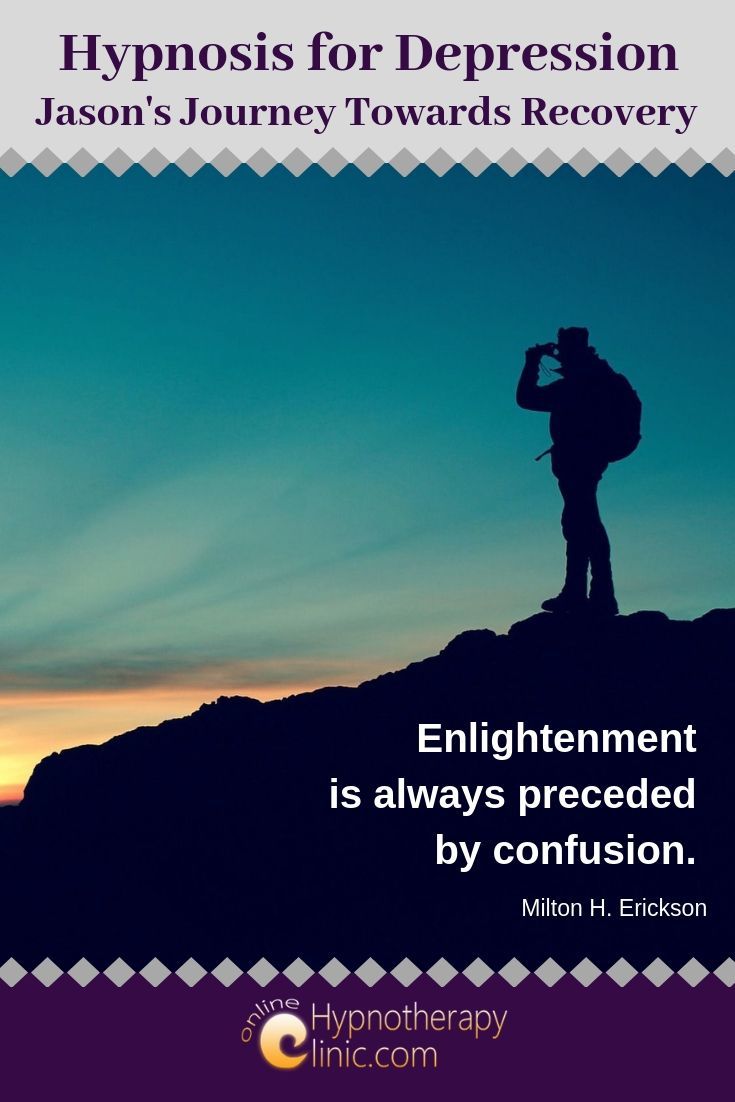 Jason was grieving for how these incidents had driven a wedge between him and his brother. He had also perceived a distance to his parents, and never understood fully why. He could now see that the young boy had been looking for back up- but that his mother and father had not been able to be there for him on this occasion. He was now able to forgive them.

The teacher, meanwhile was still living locally where Jason had grown up. Internally, Jason was now able to put the responsibility for the incidents in her court. This abuse should never have happened. In real life, he considered writing her a letter- i recommended he write this letter for his own sake- for himself. Sending it was not the important part- just for Jason to express how this abuse had affected his life.

After the three sessions of hypnosis for depression and some coaching work alongside, Jason started feeling much better and was finally able to turn his life around. Find out what became of him in my article on Hypnotherapy for Depression- Jason's Story.

I hope this article on hypnosis for depression has helped you develop an understanding of what is involved in deep regression hypnosis work- and of how this work can help people who struggle with depression to change their lives for the better.

More About Depression and Healing it With Hypnotherapy 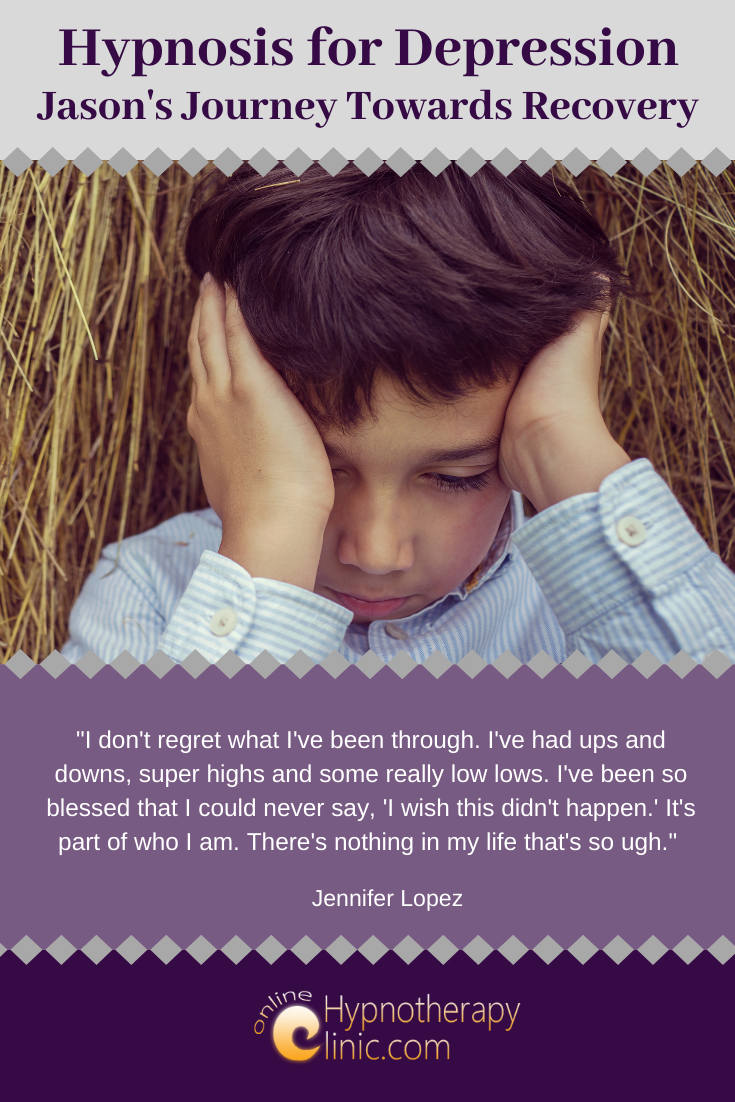 New to Hypnosis? These Articles are Designed to get You Started

How Self Hypnosis can Help You Change Your Life

I hope my article on what hypnosis for depression did for Jason has inspired you to give hypnotherapy a go for your own journey of healing and changing your life for the better. In the comments below, let our community know how you are getting on!

Regards and best wishes for your journey,